Gyre is a collection of vibrant and tactile woven sea creatures created from plastic bags. The labor-intensive process of transforming bags into yarn and then into artwork has produced colorful, whimsical, and lifelike interpretations of sea life including jellyfish, anemone, coral, and sea cucumber. The central piece in the exhibit is called Octoplas. Over 500 post-consumer grocery bags have been transformed into the large, octopus-like creature. Gyre also includes Filter Feeder, an interpretation of basic sea life affected by changes to the environment.

The Eastern Garbage Patch is a large concentration of plastic and other debris that has been accumulated and trapped by the currents of the North Pacific Gyre. It draws in waste material from as far away as Japan and the west coast of North America. Unlike biodegradable material, the plastic flotsam inside the patch disintegrates into smaller and smaller pieces while remaining a polymer. Eventually, these particles become small enough for marine life living near the ocean surface to ingest, thus entering the food chain.

The work strives to walk the line between humor and message. Playful poignant sculptures are a joy to behold, yet burden a guilty conscience. 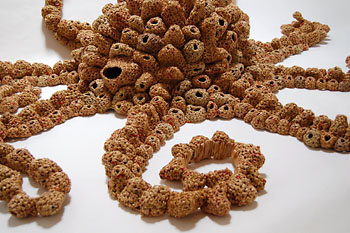 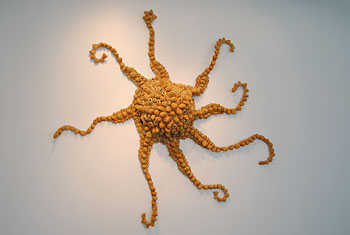 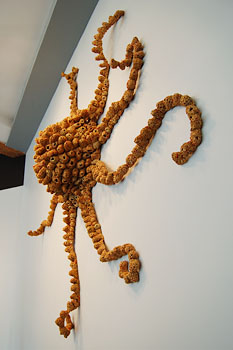